Random Thoughts on a Lack of Belief

I refuse to prove that I exist," says God, "for proof denies faith, and without faith I am nothing." But," says Man, "the earth and the universe are a dead give away -aren't they? It could not have evolved by chance. It proves you exist, and so therefore , by your own arguments, you don't. "Oh dear," says God, "I hadn't thought of that," and promptly vanishes in a puff of logic. 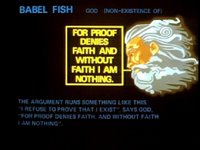